My principle objection to the so-called “Intelligent Design” movement is the damage it does to science, but religious people like the Rev. George Coyne have correctly pointed out that it’s damaging religion as well:

Coyne said the subculture of fundamentalist Christianity that insists on the literal truth of the Bible “is a plague in our midst,” obscuring the deeper marvel of creation.

“The intelligent design movement belittles God,” he told reporters before the event. “It makes God a designer, an engineer. The God of religious faith is a god of love. He did not design me.”

Coyne stressed that on matters of religion and faith, science is “absolutely neutral.” Other speakers echoed that, saying that science and religion operate in separate realms. Where religion is based in faith and concerned with the creation or moral meaning of life, science concerns itself with seeking testable, verifiable explanations for the processes of the natural world.

You have to wonder about the impulse to pick fights you know you can’t win, the apparently central thesis of fundamentalism. All the better to play the victim, I suppose.

On the science front, the discovery of Tiktaalik roseae supplies another missing link between fish and land animals:

Scientists have discovered fossils of a 375-million-year-old fish, a large scaly creature not seen before, that they say is a long-sought missing link in the evolution of some fishes from water to a life walking on four limbs on land.

In two reports today in the journal Nature, a team of scientists led by Neil H. Shubin of the University of Chicago say they have uncovered several well-preserved skeletons of the fossil fish in sediments of former streambeds in the Canadian Arctic, 600 miles from the North Pole.

The skeletons have the fins, scales and other attributes of a giant fish, four to nine feet long. But on closer examination, the scientists found telling anatomical traits of a transitional creature, a fish that is still a fish but has changes that anticipate the emergence of land animals — and is thus a predecessor of amphibians, reptiles and dinosaurs, mammals and eventually humans.

Tiktaalik sounds like my Sailfin Blenny, Bubba, who perches on rocks resting on his pectoral (front) fins and acts more like a dog than a fish. 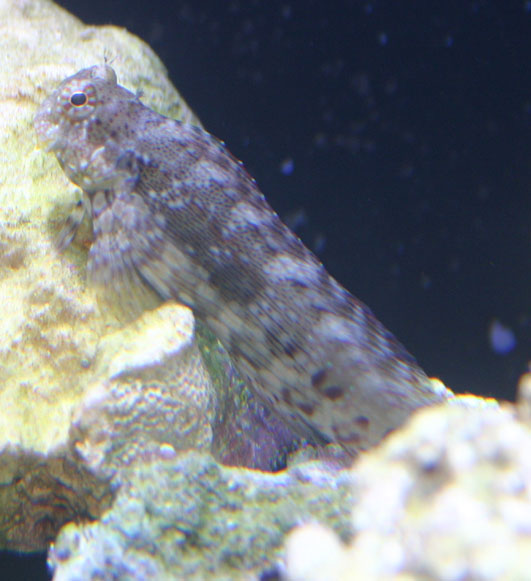 Reef aquariasts call cyanobacteria “bubble slime algae” because it forms clumps of bubbles encased in slime, with the bubbles being a byproduct of a unique form of photosynthesis. It’s treated short-term with antibiotics, and long term by keeping the water free of phosphates and nitrates so it can’t grow.

On a large scale, it was probably responsible for the Snowball Earth effect, according to some Caltech research dudes:

In the current issue of the Proceedings of the National Academy of Sciences (PNAS), Caltech graduate student Robert Kopp and his supervising professor, Joe Kirschvink, along with alumnus Isaac Hilburn (now a graduate student at the Massachusetts Institute of Technology) and graduate student Cody Nash, argue that cyanobacteria (or blue-green algae) suddenly evolved the ability to break water and release oxygen about 2.3 billion years ago. Oxygen destroyed the greenhouse gas methane that was then abundant in the atmosphere, throwing the global climate completely out of kilter.

Cyano blooms in the oceans when phosphate fertilizers run off from farms. This is a treatable problem if the will is there, and it may play a role in reversing global warming, but that’s a scary thought.

Here’s a picture of the slime.

We have a new rose-colored Bubble Tip Anemone (Entamacea quadricolor). Rosie split off a clone yesterday, about a quarter of her former bulk. Mother and clone are resting peacefully side-by-side while Thatcher the evil Gold-Striped Maroon clownfish (Premnas biaculeatus) tries to figure out how to hog both of them. I think I’ll put them on opposite sides of the tank just to drive her nuts.

The clone is on the left side of the rock, and the old mama is on top. That’s Thatcher thugging around. Click on the pitcher for larger view.

Formaldehyde really sucks. It’s carcinogenic, and breathing it causes headaches and runny mucous right away. But it’s an essential part of the glues that make plywood, particle board, and fiberboard possible, without which we wouldn’t have much in the way of homes and furniture. But all that’s about to change thanks to he lowly mussel, the groovy little mollusc that attaches itself to rocks with a sticky foot.

CORVALLIS — A weekend trip to the Oregon coast gave Kaichang Li an idea that is revolutionizing the wood manufacturing industry and will mean cleaner air indoors and out.

It’s a new adhesive that’s a safe replacement for chemical glues in plywood, particleboard and other manufactured wood that leak noxious formaldehyde fumes into homes. It’s so simple and inexpensive that Li, an assistant professor at Oregon State University’s College of Forestry, can whip it up from soy flour in a kitchen mixer on his laboratory counter.

The tenacious foothold of mussels in the ocean surf inspired the new glue, and its commercial potential could extend to almost every new home and building. OSU patented the adhesive in the United States and other countries, and is licensing it to companies.

The OSU professor figured out how to make a soy-based glue with essential amino acids from the mussel and outperforms formaldehyde and doesn’t make you sick. Hungry maybe, but that’s about it.

This kinda stuff is cool, but it makes me wonder why my smaller Giant Clam won’t stick herself to a rock like she’s supposed to.

The question for the day is how much an real aquarium fanatic would pay for a hand-crafted teak stand and hood like this one. I’m wondering if there’s a business in making them.

The creationists who believe the world and everything in it was created by a giant pink bunny must have been praying extra hard these past few days:

It appeared to be one of archaeology’s most sensational finds. The skull fragment discovered in a peat bog near Hamburg was more than 36,000 years old – and was the vital missing link between modern humans and Neanderthals.

This, at least, is what Professor Reiner Protsch von Zieten – a distinguished, cigar-smoking German anthropologist – told his scientific colleagues, to global acclaim, after being invited to date the extremely rare skull.

However, the professor’s 30-year-old academic career has now ended in disgrace after the revelation that he systematically falsified the dates on this and numerous other “stone age” relics.

Yesterday his university in Frankfurt announced the professor had been forced to retire because of numerous “falsehoods and manipulations”. According to experts, his deceptions may mean an entire tranche of the history of man’s development will have to be rewritten.

This sort of thing (Scieno-Teutonic dissembling) really irritates me because it gives ammo to the forces of darkness.

Have you heard of Wi-Fi? I'm one of the people who created it. Check my podcast: https://t.co/dUDxVdqvxw

The President’s legal team may not be the best in the business. Their defense against the articles of impeachment boils down to “He said he didn’t do it and that’s a fact!"

I ordered this PopSockets from Amazon during yesterday’s #CongressatCULaw hearing. Got it today and it’s cool.

In which a former House speaker demands Apple redesign its products retroactively to provide it with a capability it no longer has.

Sadly, even Apple doesn’t have time travel technology, although the design of the new HQ suggests it may be a priority.

It’s always good to know what Rivada Networks is thinking.

It is time to have an open debate about the AT&T-FCC-old guard alliance with the Pentagon bureaucrats which for a year have crippled America on 5G, blocked rural Americans from service, and allowed China to defeat us around the world in rolling out 5G services.